We are sorry, at the moment we can not offer you any special offer. However, this may change quickly. Therefore, do not hesitate to visit our offer page again soon. You are also welcome to contact us directly with your individual request.

We are sorry, at the moment we can not offer you any special offer. However, this may change quickly. Therefore, do not hesitate to visit our offer page again soon. You are also welcome to contact us directly with your individual request.

We are looking forward to your booking. See you soon for your farm holiday in Castelrotto! 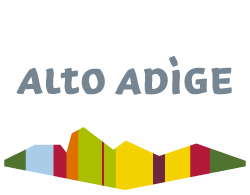 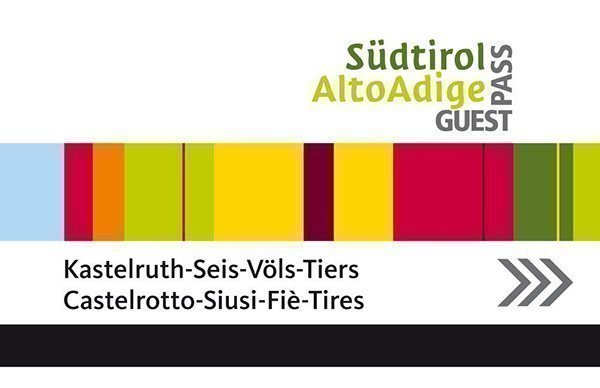 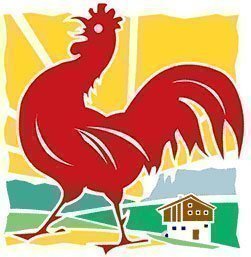 Your family experience at the foot of the Dolomites 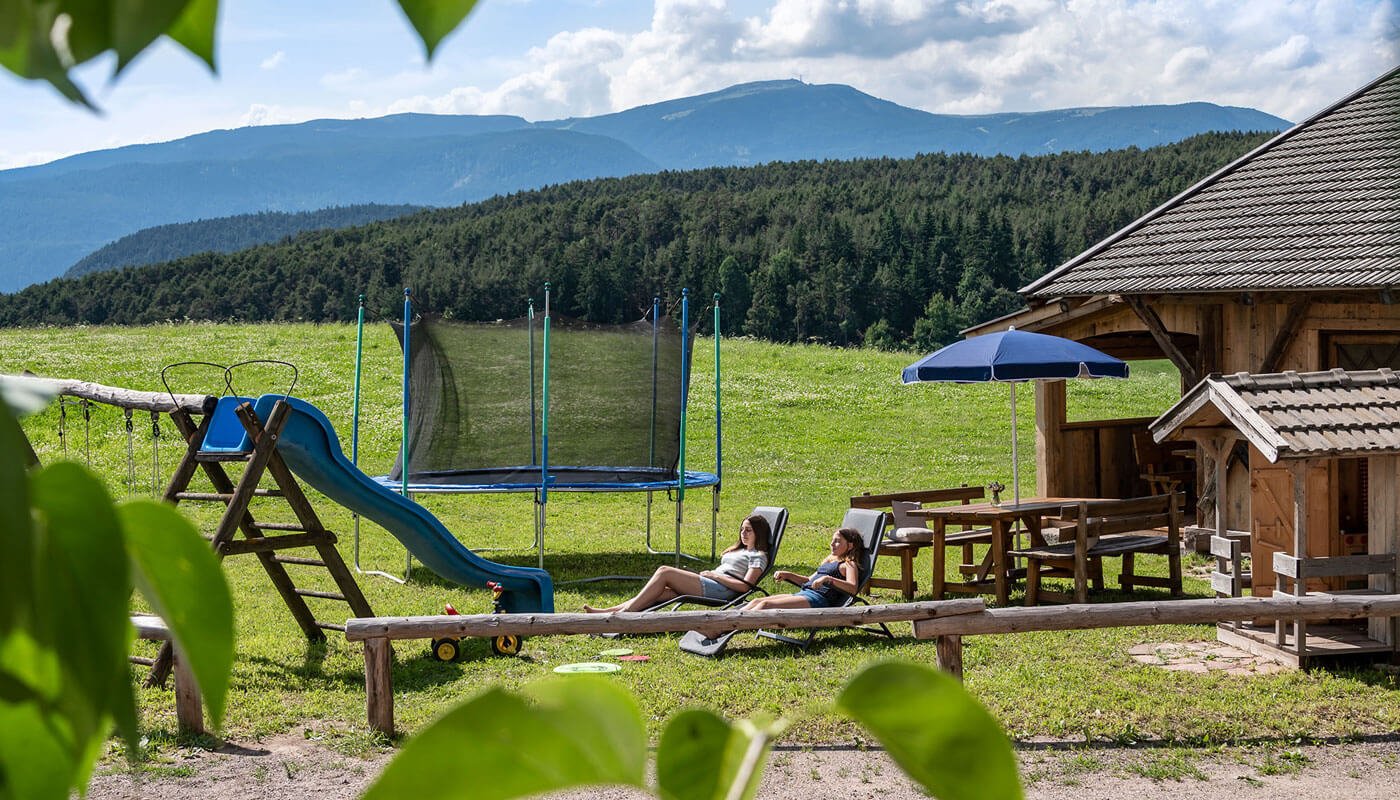 A farm vacation in South Tyrol is your best choice to escape from everyday stress and monotony. Around the farm Plieghof you will find almost untouched nature with a high recreational value. Enjoy an extended hike in Castelrotto to the alpine huts of the Alpe di Siusi, a bike tour, a ski trip or just relax on the sunny lawn here at our farm – the farm Plieghof offers an ideal starting point for your holiday activities. You and your entire family are warmly welcome and will certainly enjoy our genuine South Tyrolean hospitality. 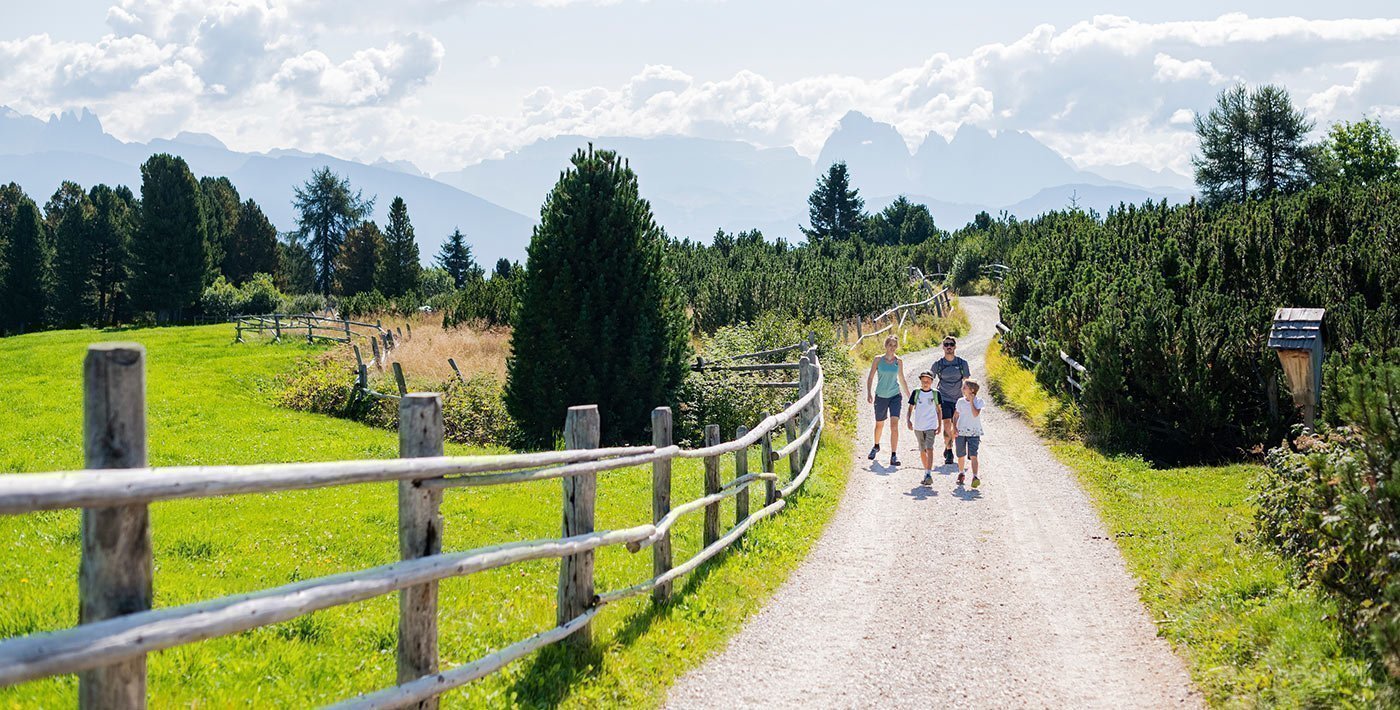 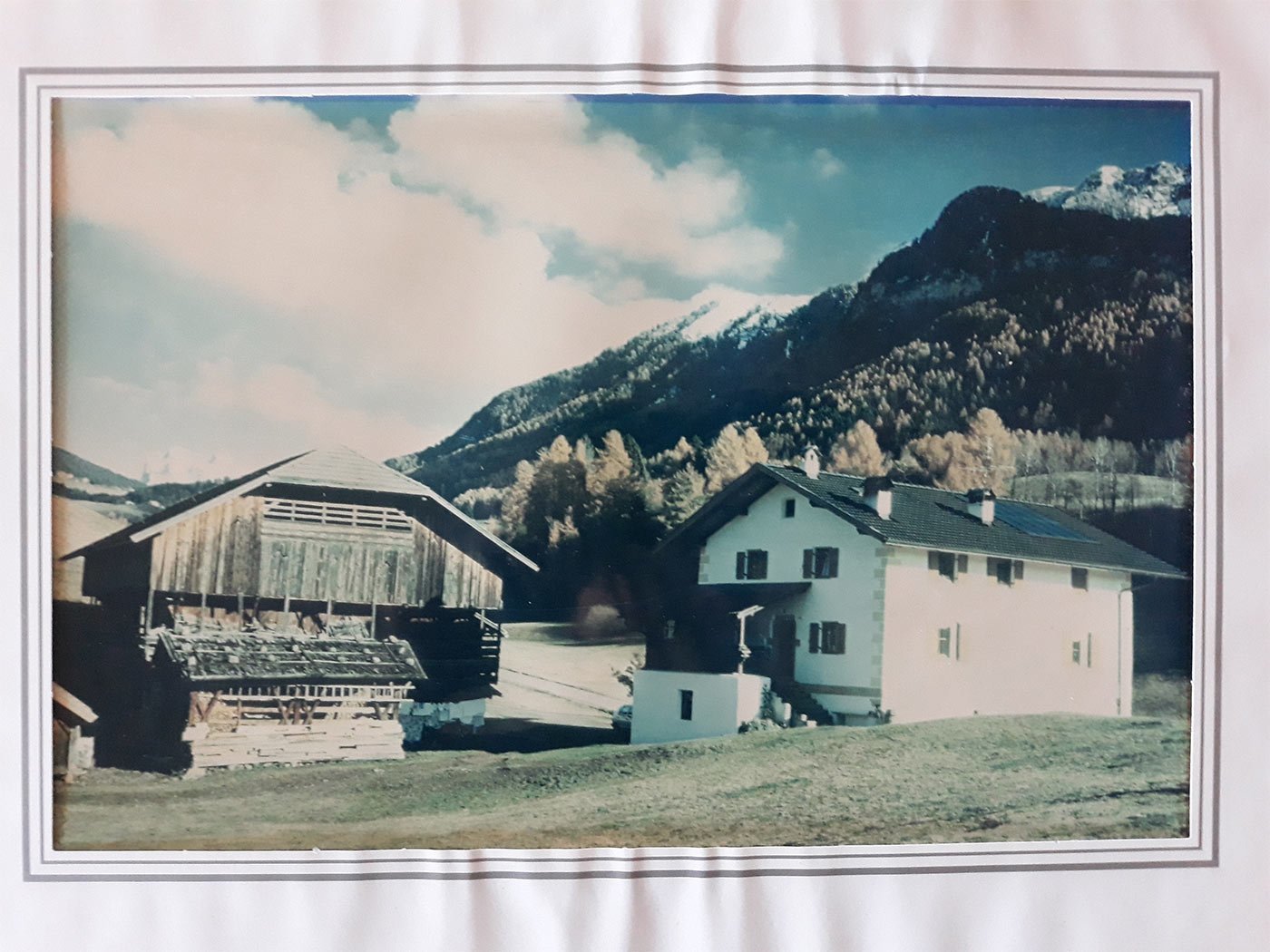 The Plieghof is a traditional South Tyrolean farm with a century-long history. It was first mentioned in 1393 under the name “Plig”. The owner was Matheys Palüger. At that time, the farm already included a barn with stables, an herb garden, fields, meadows, and a forest.

In 1680, the farm passed to Jakob Tyrler and has remained in the family to this day.

In 1935, Josef Tirler took over the farm and had 6 daughters with his wife Maria Lang.

Since there was no male descendant, Tirler Katharina and her husband Jaider Florian took over the farm in 1966. They had four children. On October 22, 1983, they were given the designation Inheritance Farm by the South Tyrolean provincial government. A farm receives this award only if it can be proven that it has been inherited within the same family for more than 200 years in uninterrupted succession. In 2007, the eldest son Jaider Andreas took over the farm. In 2017, he and his family decided to build a new house, right next to the farm building. In 2019, the family moved, and the old house was demolished. Thus, today we are immensely proud to live and farm in this special place and to be able to convey the beauty of our land to our guests during their farm holidays in South Tyrol. We – that’s Andreas, Rosi, our daughters Sabrina and Leonie and Grandma Katharina. Because we are a family business with heart and soul, as your hosts we will always have plenty of personal attention for all your requests, questions, and suggestions. 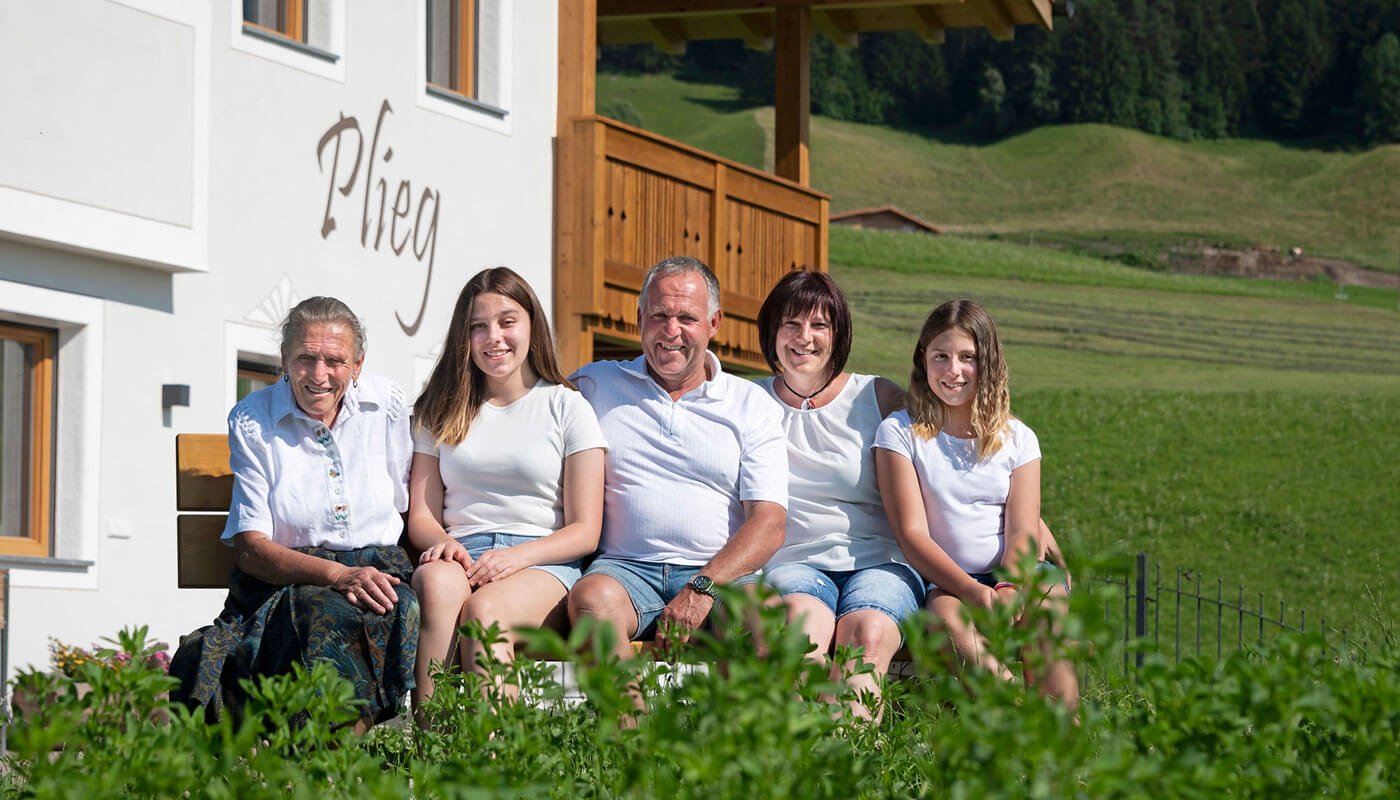 Many highlights during your holidays
in and around Castelrotto 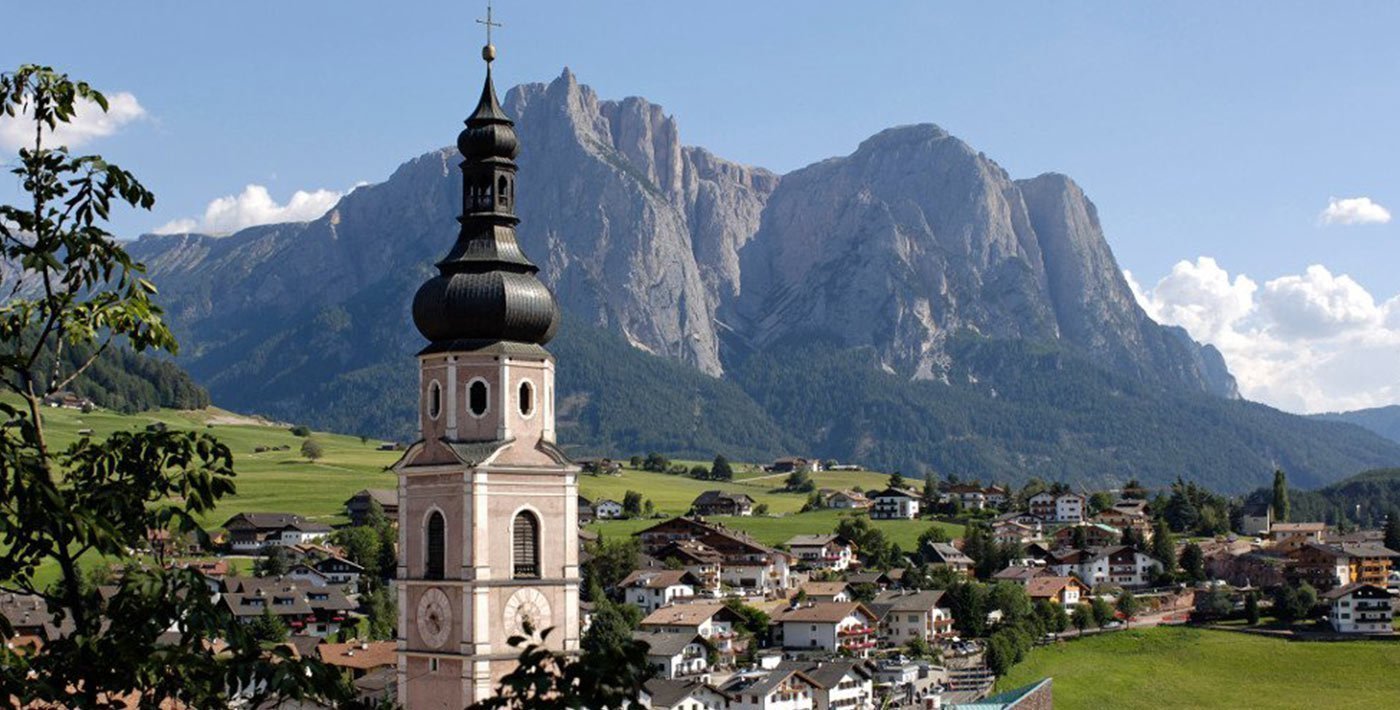 The holiday village of Castelrotto is just 1 kilometre away from the farm Plieghof. Thus, you may explore the picturesque surroundings on foot and visit the shops and taverns in town. Perhaps you would like to participate in the popular music festival Kastelruther Spatzenfest? During your farm vacation in South Tyrol you’ll have a seat in the front row, so to speak. Furthermore, there are many other major events in our region, such as the Oswald von Wolkenstein Ride – one of the most legendary folk festivals in all South Tyrol. Around Castelrotto the white rock formations of the Dolomites beckon, and countless hiking trails lead you across the Alpe di Siusi. Also, village walks, and theme trails are just as worthwhile in the summer as fun on the slopes and snowshoe tours in the winter.